I received my order of stretcher bars this week and framed my ice flowers piece. I am deciding if it should be called Ice Flowers, Ice Flower Riot or Ice Flower Stampede. What do you think?

I had never put stretcher bars together before but it was pretty simple. I ordered extra support bars since the piece is so long and narrow. The supports help keep it square.

Once I got the stretcher bars together, I put them on the back of the piece and began stapling from the centers outward. 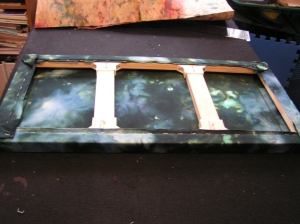 The corners were a bit tricky but I finally got them folded nicely. 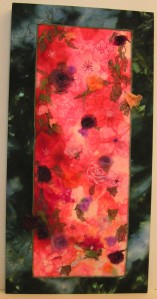 Here it is. This is a terrible photo but we’re having a blizzard here so I couldn’t take it outside. I’ll have to get some better photos later. I decided against the leaf sprigs. I also had a suggestion to add a more prominent flower as a center of interest. I did try a few but didn’t like them so I just left it as it is. 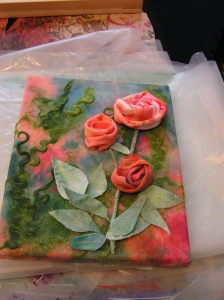 I have shown this piece before but I really didn’t like the leaves. I had previously made really long leaves that looked like tulip leaves. So I tore them off and cut them up and now I think it looks more like rose leaves. I just need to glue them down now. 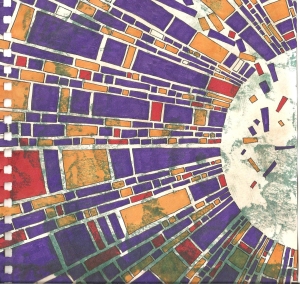 I have still been working in my circles sketchbook. This is one of the pages that I have done with markers. The background was a breakdown screen print from our mammoth screen printing session. Hope you have a good weekend and thanks for stopping by!

Thanks for stopping by. I'd love to hear your comments so please let me know what you think. Cancel reply

This site uses Akismet to reduce spam. Learn how your comment data is processed.

All contents of this website are Copyright © Ruth E. Lane. All rights reserved.