I have seen a lot of people recreating famous paintings online. So I thought I would give it a try with an applique piece. I used Paul Klee’s Before The Snow as inspiration. I had printed the photo of the original out in black and white so that I could see the values and the shapes better. It has been several months since I printed out the photo and I knew it had something to do with snow but I didn’t remember the title even. So I started thinking it would look good in a combination of blues and purples.

I used a hand dyed fabric for the background, covered that with fusible and then added tulle and sheer fabric.

Here I have added the clouds and the foreground plants. 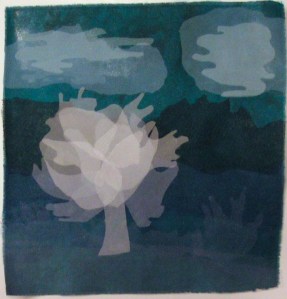 Then I added the tree. So it was definitely looking snowy. And then it snowed here, which isn’t that unusual in April but when you’re housebound, the cabin fever seems to increase since it was too cold to even go outside in the garden. But I was celebrating the snow with this new piece.

Then I added free motion machine stitching. I tried to keep the stitching fairly simple and just give a little bit of line definition. So then I decided to go back and look at the original photo in color. Imagine my surprise when it turns out that it’s Before the Snow and it’s in fall colors. But that’s OK, After The Snow turned out as I had been seeing it in my mind’s eye.

Thanks for stopping by and I hope you’re staying well.

All contents of this website are Copyright © Ruth E. Lane. All rights reserved.